Talk of the Month

Whats On in April

The 64-acre garden conserves many rare plants from all parts of the world, including one of the finest collections of trees in Britain.

The formal Italian garden holds centre stage with fountains and a blaze of colour, flanked by stream, American and Mediterranean gardens. With 5 display glasshouses including the famous 1820s Palm House, countryside museum, numerous historical follies and children’s play areas there really is something for everyone at Bicton.

There are great collections of conifers, Rhododendrons, Magnolias, Camellias as well as herbaceous and seasonal displays all set in a relaxed, family and dog (on leads) friendly setting.

What to do in the garden this month

Christmas greenery, straight from the garden

What could be more lovely than stepping out on a cold and frosty morning to pick home-grown Christmas greenery, straight from the garden? Graham Rice offers some expert plant suggestions.

It used to be that the only option for holiday greenery in the home was the Christmas tree, along with holly and ivy. Now everything’s changed, and very definitely for the better.

Today an increasing range of attractive evergreen alternatives for decorative foliage is available to use in wreaths, in table decorations and in long-lasting seasonal arrangements. And the great thing about so many of these alternatives is that you can grow them yourself at home. Here are ten options.

Numbers at the end of each entry refer to plant height and RHS hardiness rating. 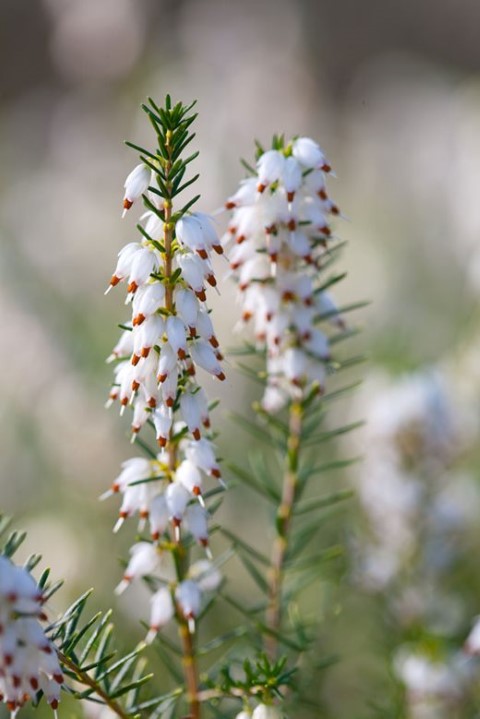 More lime-tolerant than other heathers, winter heathers come in a range of foliage colours and with reddish, pink or white flowers. There are more varieties of Erica carnea, but E. × darleyensis is taller, with longer stems that intertwine better into wreaths. ‘White Perfection’ AGM has clusters of white winter flowers like the first snowflakes. 45cm (18in), H5. 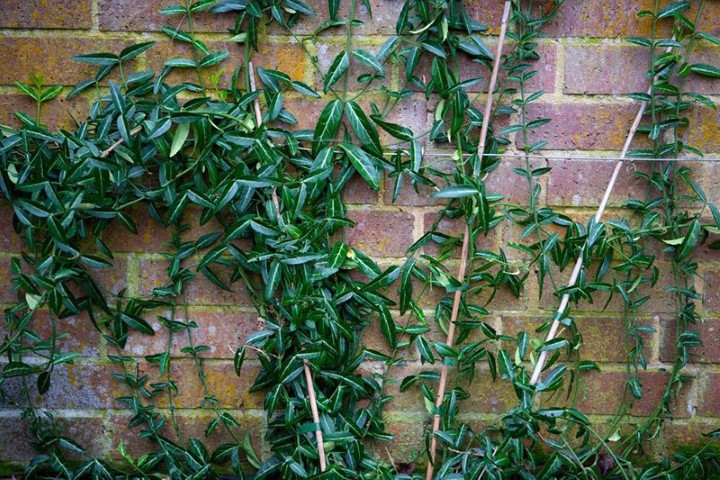 Each individual dark green leaf of Euonymus fortunei ‘Wolong Ghost’ AGM is shaped like a dagger and features a ghostly white band along the midrib with spidery white veins. Carried on extending shoots which make good ground cover, ‘Wolong Ghost’ will also climb, clinging by aerial roots. The long branches are ideal to weave into wreaths. 30cm (12in), H5. 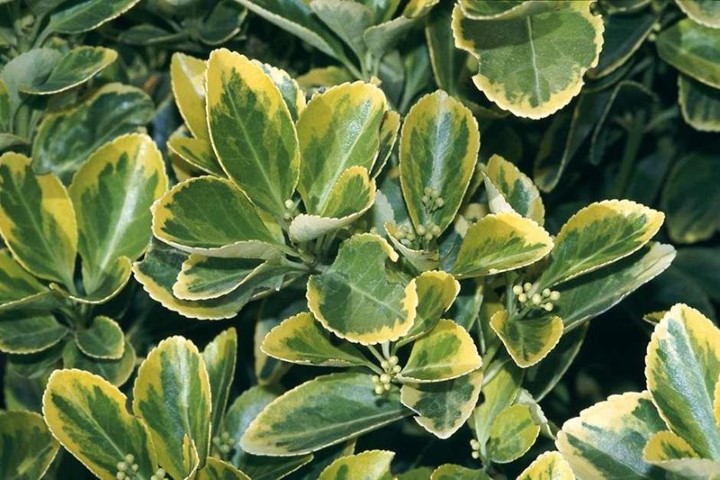 The densely packed, upright growth of Euonymus japonicus ‘Ovatus Aureus’ AGM is a rich and shining green with the edge of every glossy leaf irregularly coloured in gold, brightest on the younger growth. Plant in a sunny situation to promote the best colour. Not the most vigorous, but creates sunny sparks in Christmas wreaths. 1.2m (4ft), H5. 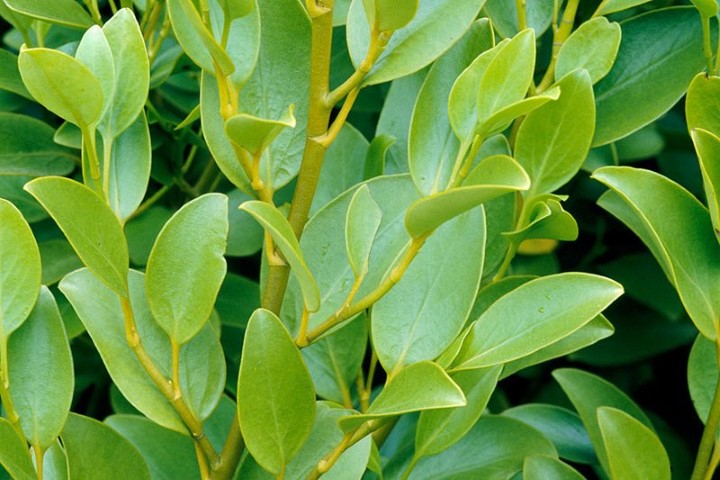 The rounded foliage of Griselinia littoralis AGM has such a clean and shining look, noticeably paler and glossier than holly with its deep green colouring, that blending the two is a very effective approach. 3m (10ft), H5. ‘Variegata’ AGM features the addition of creamy or pale yellowish margins to the foliage although the plants are less vigorous and slightly less hardy, growing to 1.8m (6ft), H4. 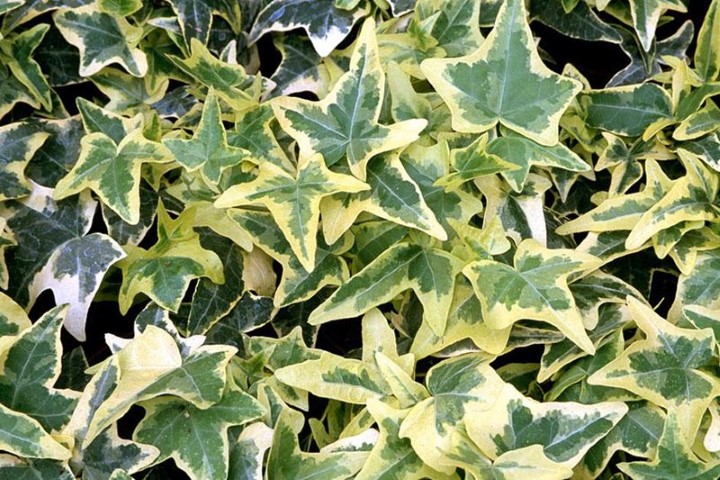 You might have pulled some wild ivy from a fence or a tree trunk to help fill out your Christmas greenery, and it works well. But, like wild holly, the leaves are very dark. Variegated kinds, such as Hedera helix ‘Ceridwen’ AGM with its bold, three pointed leaves with bright yellow margins are far more colourful. Sometimes even the whole leaf is bright yellow. 2m (6½ft), H5. 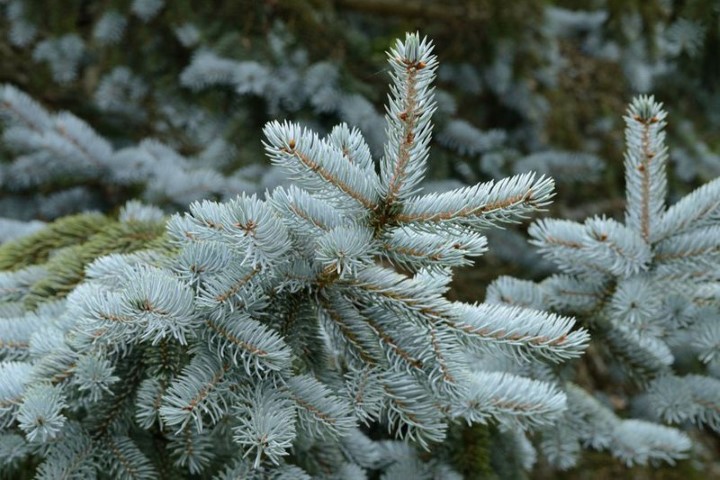 The blue needles of this dwarf form of the Colorado spruce (Picea pungens (Glauca Group) ‘Hoopsii’) AGM make a bright, refreshing change from darker shades, bringing a lift of light to wreaths and table centrepieces. Avoid the dense dwarf varieties such as ‘Globosa’; they just don’t produce enough growth, and don’t expect your ‘Hoopsii’ to look elegant if you cut off branches every Christmas so plant in an out-of-the-way spot. 2.5m (8ft), H7. 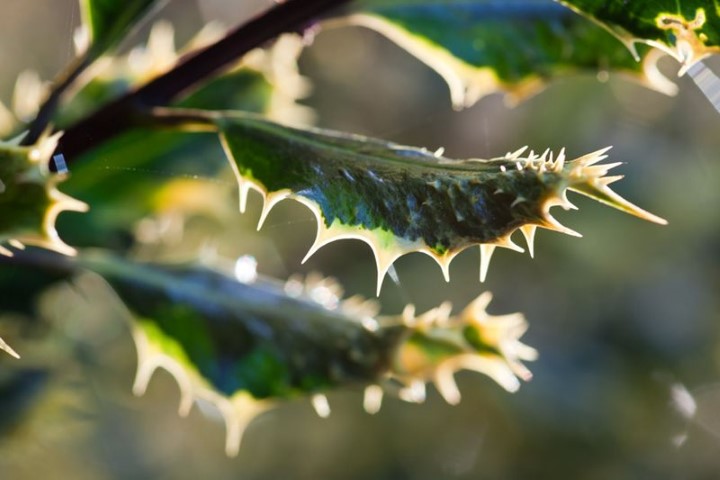 Holly with a difference

The few holly varieties without spines are often recommended, for obvious reasons, but Ilex aquifolium ‘Ferox Argentea’ AGM goes the other way. Exceptionally spiny, even with spines growing out of the blades of the leaves, ‘Ferox Argentea’ has purple stems, creamy edges to the leaves and a mass of spines. Intriguing and effective, but no berries. Height up to 8m (26ft), but can be pruned to keep it much smaller. H6. 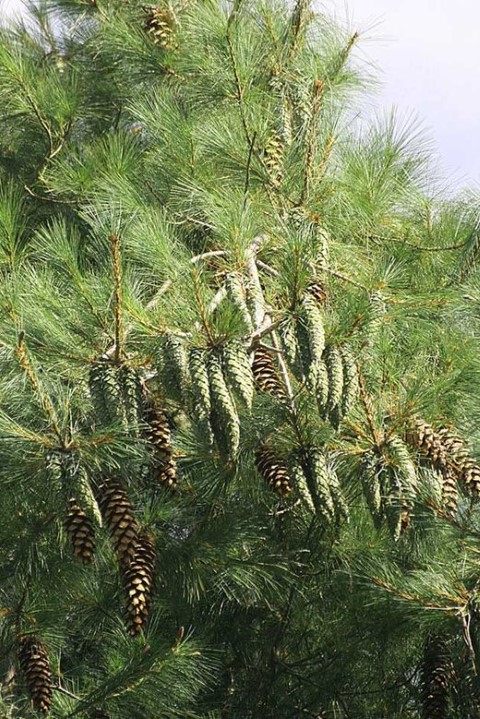 Planting a pine for Christmas greenery may be a surprising idea, but one with such beautiful long needles – reaching 15cm (6in) in length – is a very useful addition to our palette of seasonal decorations. The Weymouth or white pine, Pinus strobus, grows strongly (though it dislikes limy soil). Cutting boughs for Christmas is not going to improve its shape so choose its planting site carefully. 5m (16ft), H7. 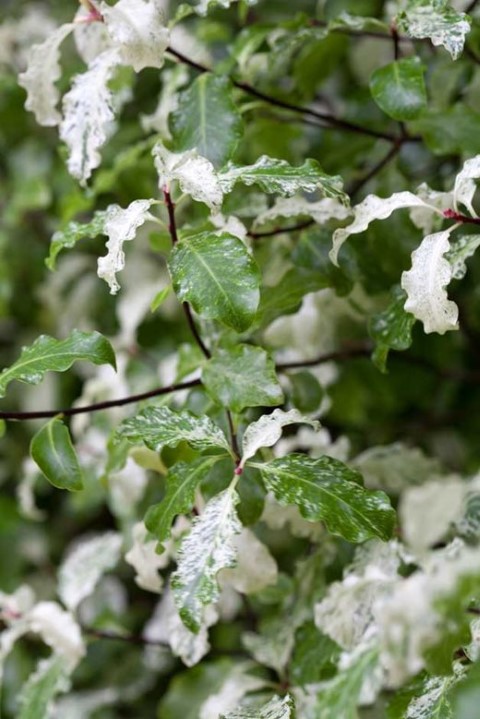 The combination of small, neat foliage, splashed with cream and held on slender but stiff shoots, plus a tolerance of pruning, makes Pittosporum tenuifolium ‘Irene Paterson’ AGM an ideal shrub for garden use and for cutting for indoors. Its vigour held in check by this regular pruning, at this time of year the foliage often develops a pink tinge. 2.5m (8ft), H3. 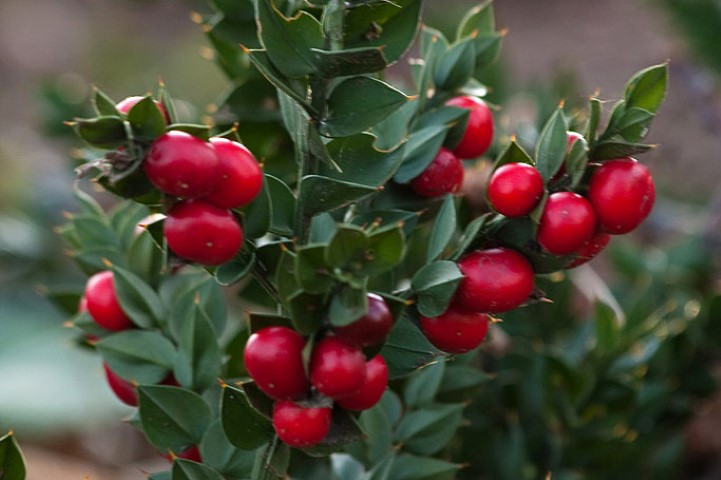 Ruscus aculeatus, butcher’s broom, is probably the evergreen that lasts longest when cut and still looks good, even without water, weeks after cutting. The variety ‘John Redmond’ AGM has the bonus of producing bright red berries and, unlike most other forms, without the need of an additional male plant. It’s also tough, resilient and will grow in dry shade. 75cm (30in), H5.

Wallflower, or Erysimum, is a symbol of fidelity, given from one lover to another. Wallflowers make for meaningful additions to bouquets, as they have since the Middle Ages. Because it is known for clinging to vertical surfaces and staying out of the garden “fray,” it has also become synonymous with the shy and retiring.

Wallflowers run the gamut of warm tones. They come in colours ranging from light golden yellow to orange to red. They can also be purple or brown. Some wallflowers have multiple colours on a single stem, transitioning from pink to purple, and they look good as mixes.

Wallflowers, and other plants of the Erysimum genus, were initially used as medicinal plants, not ornamental ones. Native to Southern Europe, especially Greece, the wallflower was well-established in medicine by the beginning of the common era. For instance, Pliny the Elder classifies these plants as medicinal in Naturalis Historia around 77 CE. Pedanius Dioscorides, writing around 70 CE in De Materia Medica, specifically called out Erysimum cheiri as a medicinal herb. Thus, was it enshrined in European medicine for the next 1,500 years.

Wallflowers are such a popular flower that they’ve undergone some serious cultivation in the centuries since their discovery. Some of today’s best choices include “Bowles’s Mauve,” a reliable wallflower that returns year after year. “Blood Red Covent Garden” is also easy to grow and returns year after year.
However, some of the less resilient wallflowers have better scents, including “Red Jep,” which is a pretty red purple. “Winter Orchid” is an example of one of the multicoloured wallflowers. Its blossoms start out a deep orange and progress to purple before senescing (dying off). Other great choices include “Apricot Twist,” a bright orange, and for lovers of beautiful, blinding whites, “Rysi Moon.”

The etymology of wallflower is pretty simple. They grow on walls, clinging to them as they climb. Hence, wallflower. The Latin name for this species, Erysimum cheiri, stems from the Greek word “cheir,” which means hand. This refers to the custom of carrying the flower in small bouquets to festivals or events. Dating back to the Middle Ages, this tradition predates wallflowers’ use in bouquets today as a refreshingly dainty specimen.

The cost of annual membership remains at only £7 per person, which entitles you to free admission to our interesting monthly talks held in Kilmington Village Hall on the second Friday of the month. Application Form

Don’t forget that if you have any gardening stories or photos to share with us, we would love to hear from you!

Did you see our idea about converting a toilet paper roll into a plant pot last month?

At our last talk the speaker gave us another great idea – how about planting a herb seed in a tea-bag? See what you can come up with – there are lots of ideas on the internet so you can recycle at the same time as growing plants. 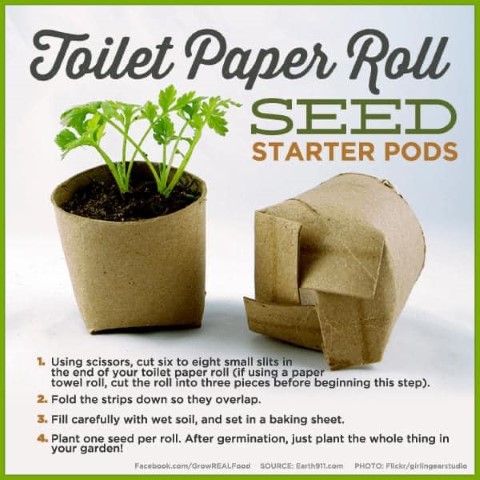